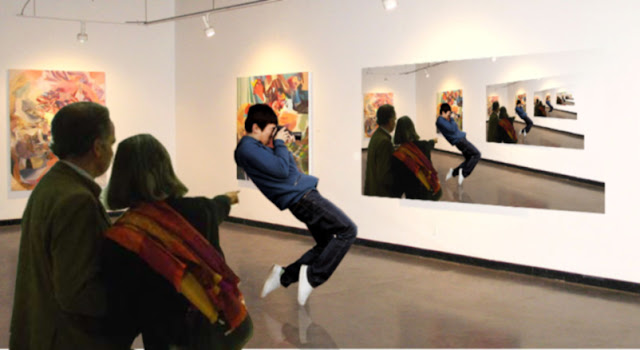 I have noticed, of late, a tendency amongst European aesthetes of a certain generation a fashion for looking at Asians looking at things through cameras. Their curiosity seems unbounded at what would seem a fairly mundane sight, peering through their half rimmed spectacles or ironic black frames, at teens and 20 somethings from Korea, Japan, China or even Myanmar taking photos at exhibitions or performances.  Commonly they will be heard to make a broad generalizing remark along the lines of, 'and this is how they look at everything here'. My attention to this phenomenon was first drawn after I had organized a performance in latter day Chosun for a one-eyed Scottish chansonier and while watching the performance, I noticed two strange figures crouched in the audience looking not at the stage, but at their fellow audience members. After the event, I discovered they were an artistic couple from Berlin who remarked bewilderedly, 'I haff nevah seen any-zing like eet bevore!'
Puzzled and perplexed by this oddly naive and yet sincere behavior I asked a German directly about his fascination.
'You see, we Europeans, with our history and culture, perceive the world through our human faculties and senses without augmentation, but the Asians, having come to Modernity and State building later, and following our example, have not developed a similar Romantic sensualist sensible distance from the world but rather perceive it through technological viewing devices as inter-penetrative, supra-mental, organisitic appendages. I have a theory that, as Lacan posed a mirror stage for the typical European infant for the point at which it sees itself in a mirror and begins the process of forming an objective ontology and Imaginary construction of the world outside of its immediate sense responses, the Asian in fact goes through a 'monitor stage', that they would first perceive their own image as an object outside, not as a reflection but as a double, doppleganged digitally on a screen. Therefore, from that moment onwards, the Asian begins the trajectory of perceiving the world through a Digital Imaginary and therefore, in fact, cannot actually see the object in front of its eyes other than through the screen which presents the amanuensis through which being is formed. That, and also I think their eyes are really small so they need to take pictures of everything so they can see them properly.'
Posted by Royce at 5:55 AM