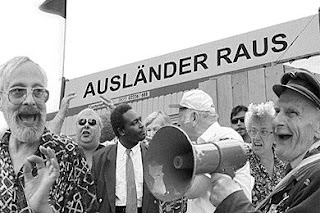 The concept of the show was that a dozen real asylum seekers lived inside containers, but instead of being voted out of the show (like in Big Brother), the candidates were to be voted out of the country. Creating and utilizing such a situation of living in a strictly confined area, not knowing what would happen next, was to remind the audience of Nazi concentration camps, pointing at and making artistic use of existing parallels between the Nazi camps and television formats like Big Brother
[...]